In 1995 BMW introduced the EWS2 system for passive immobilisation of the engine management systems. This was the first time they installed transponders into the ignition key with a rolling type encryption code. 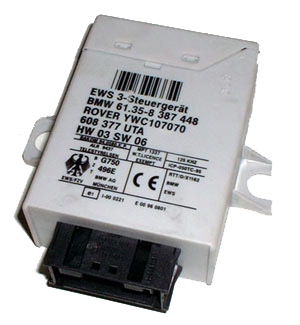 The main function was that each time the key was cycled, the code in the transponder and the EWS module would roll around to the next one in the algorithm. And DME was sent the correct signal to enable fuel and ignition processes. Also, the EWS module would disable the starter if the wrong key was received.
Later in production, this went onto EWS 3, fitted closer to the transponder read coil, not now requiring a read and transmit module to be fitted close to the ignition switch. This system was used until the end of the E46, around the end of 2007, and can also be found in MINIs.
On both EWS2 and EWS3, the module was pre-programmed at the factory with 10 keys. Only 3 were issued with each vehicle, leaving 7 spare key identities in the module for future use. These are what the dealer issues when new keys are purchased with all the correct documentation. They come pre-programmed, ready to start the car after a simple remote control programming procedure .
This is where the help line comes into play. This system has a flaw. We get many calls from garages that have worked on these models equipped with EWS immobilisation. Then telling us, “We have a BMW that won’t start, nothing we have done could cause this! It was only in for minor work and now it has a code for EWS tampering or invalid key. The customer only has one key!”
Did you leave the ignition on? Only while we serviced it for a few hours, but we kept a battery charger on all the time.
You have managed to delete the key from the EWS, a common problem with this system. If the key is on and the engine is not started for a long period of time, the system makes that key invalid.
There is a solution, With the correct equipment, you can read the MCU data inside the EWS and generate a new key and assign it to a spare location in the unused 7 remaining slots.
Any good locksmith can perform this programming for you. Or order a replacement from the main dealer.